Last week I returned from the Drama for Life festival and African Research Conference at Witwatersrand University, Johannesburg. The festival explores how live performance can prevent the spread of HIV. This year the theme was 'Sex, Actually'. 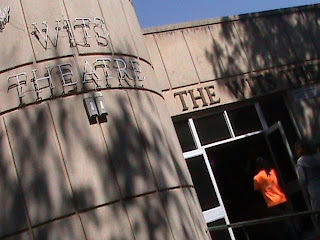 The festival and conference were mind-blowing. Performers were predominantly students from the Drama and Drama for Life postgraduate course at Wits. There were also performances by critically acclaimed choreographer, PJ Sabbagha, and other local performers.
Local performer, Deep Fried Man 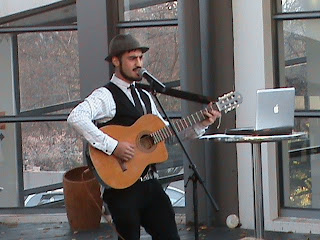 Protest Theatre
On the first night off the conference we all bussed up to Constitutional Hill. Constitutional Hill is the infamous prison that detained many anti-apartheid activists, including Mahatma Gandhi and Nelson Mandela. Later, this prison was transformed into the court which drew up South Africa's constitution, which stands as one of the most progressive in the world. Now, Constitutional Hill is a museum which tells of the struggles of apartheid, and the dreams that wouldn't die.
Students performed excepts from plays they had performed during the year around the old prison. Placed around Constitutional Hill, we walked in groups to each one. The combination of the students' commitment to what they were saying, and the historical landscape in which performances were set, combined to give this performance event deep emotional resonance. the students can act, dance, and oh! can they sing. Nice. 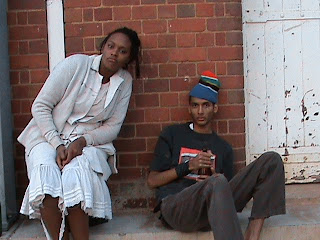 Performances at Constitutional Hill were in the style of protest theatre. These performances told stories of struggle during the apartheid era, adressing themselves to the oppressor, a plea for mercy. They used minimal props and very physical acting styles. A leading writer of protest theatre is Athol Fugard.
In a recent discussion on protest theatre chaired by the head of DFL, Warren Nebe, and between Nobel prize winner Nadine Gordimer and Chilean-American writer Ariel Dorfman, theatre was suggested as particularly important in bringing about change in South Africa. Art's function was considered to be as societies' conscience.
Protest theatre is not the same as agit-prop theatre, as it does not attempt to incite political action or retribution. Instead, protest theatre is more like a lament, an appeal to the conscience of the oppressor. No solution is sought, the problem is simply stated. Or often, wailed. 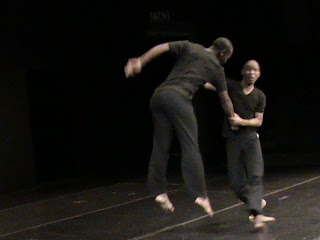 Gender Bending in Jo'burg
The performers and presenters embraced the festival theme, 'Sex, Actually', as many shows explored same-sex desires and gender fuck. As someone who enjoys a bit of queer activist activity this suprised me. I'd heard that due to South Africa's strong and large Christian population it's a taboo to speak about sex, especially sex that's not straight, monogamous, and within marriage.
But the DFL festival did not show this same silence. I wonder if choosing such a provocative theme opened the festival up to exploring riskier work?
Several shows charted a masculinity that is not all sexually, politically and physically powerful.
The queer narrator of Pillow Talk 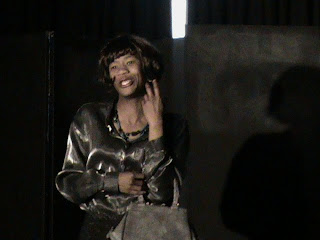 ﻿
Notions of femininity were not challenged with similar gusto, only one show, a piece of performance art, examined ideas of women as being sexually available and desirious.
Posted by Aurora Murphy at 5:31 AM