Performance as a Ritual

In order to look for potentials for performance to prevent rape, I examine 2 broad types of theatre - the first is applied theatre, or what is sometimes called community theatre.

Applied theatre understands that performance functions in several different ways; performance may act as a mimesis of life, as a platform for catharsis, and as social ritual. Looking to performance as ritual could offer possibilities for transformation of the rape script, as rituals are commonly used by communities as ‘both indicators and vehicles of transition from one sociocultural state and status to another’ (Turner, 1979, p. 466). Rituals are used by social groups as a process of shared meaning-making and identity formation, with individuals creating, expressing, and changing themselves in conjunction with their society. During rituals there is a period perhaps potent for transformation, this is the liminal period. The liminal period is discussed by anthropologist Victor Turner as a reflexive period in which the initiate is between realities. Initiates are not who they were, but not yet who they are going to be. The liminal period is ‘betwixt and between’ social realities, on the threshold, neither here nor there (Turner V. , 1987). Sitting between times and spaces liminal phases are apart from daily duties, disconnected from everyday social masks. Liminality can include the inversion, subversion and contradiction of daily roles, with this playful performance of alternative realities a way to examine and critique both one’s own social role and the positions of others. The liminal is ‘a time of enchantment when anything might, even should, happen’ (Turner V. , 1979, p. 465).

The Show Junkie by At The Foot of The Mountain

Performances may be ideally placed to become liminal experiences, as they sit apart from daily realities, yet can continue to reflect back upon life. As Turner points out, performance can act as shared reflexivity, in which groups examine themselves. Participants in theatre are set apart from their everyday roles, ‘full of experiment and play’, with the freedom to create new ways of being (Turner, 1979, p. 466). ‘At The Foot of The Mountain’, a feminist experimental troupe established in Minneapolis in 1974, drew upon ritualistic practices, embodying shared processes of transformation (Greeley, 2005). Their piece Junkie! incorporated aspects of the liminal, becoming a space between realities that invited actors and spectators to reflect on current difficulties, and embrace new ways of being. As an attempt at group transformation, Martha Boesing, co-founder of the ‘At The Foot of The Mountain’ says Junkie! was ‘a spontaneous and immediate communal renewal, [and] the first step to spiritual surrender and recovery’ (Greeley, 2005, p. 55). At the conclusion of the play spectators were invited to share their own personal stories of addiction, loss, and recovery. Confines of everyday societal roles were forgotten, as participants came together to traverse shared journeys of recovery. Roles that usually distinguish and define people were overthrown, and stories that are usually private and painful formed the basis for united growth. Connectivity, reflection and expansion were foregrounded, using performance as a ritualistic practice for transformation.

These performative processes enabled an interconnection between actors and spectators, and between performance and life (Greeley, 2005; Rothenburg, 1988). They emphasised shared experience and togetherness, replicating the equality of neophytes undergoing a ritual (Turner V. , 1979). Rather than reflecting one, unified voice, ‘At the Foot of the Mountain’ sought to provoke a diversity of opinions, journeys, and emotions. Rather than driven by scripts written by a sole playwright who sits outside the action, performances instead emerged through group-devised improvisations in response to stimulus, and audience interaction (Greeley, 2005; Rothenburg, 1988). However, this drive for a participatory and equitable form of shared transformation has been criticised as coercive, and of stressing unanimity above diversity by feminist performance theorists Sue-Ellen Case and Jill Dolan. On remarking upon The Story of a Mother II, a performance about motherhood played by ‘At the Foot of the Mountain’ at the Women and Theatre Program in Chicago in 2001, Case said mothers were over-generalised and idealised, assumed to be positive and nurturing figures. According to Case, the performance universalised notions of motherhood, neglecting diverse experiences of individuals. Both Case and Dolan felt the shared ritual of ‘going into the mother’s body’ at the finale of the show was coercive, not allowing for multiplicity or complexity (Greeley, 2005, p. 59). In looking to performance as transformative Case and Dolan point to the coercive potentials of ritual. While ritual may be a process for initiates to shift from one social role to another, these roles can be predetermined through the ritual structure itself, rather than created by participants. Ritual then may not be a successful framework to use if looking to performance as a way of transforming the rape script. Rather than as a tool for social change, ritual can serve to simply reinforce traditional social scripts. 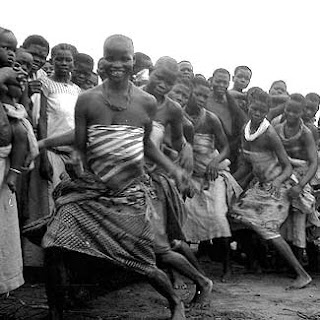 Yoruba Women dancing
The work of anthropologist Mary Thompson Drewal (1988; 1991; 1992), however, suggests that rituals are not necessarily about stabilising the social order, but can be a continuous process of expressing and negotiating change. Thompson Drewal observes rituals of the Yoruba African tribe; these are characterised by play and improvisation, allowing participants a degree of autonomy, and the potential to change the rituals themselves (Thompson Drewal, 1992). According to Thompson Drewal, rituals are not simply a ‘relic from the past’ replicating traditional social norms, but ‘dialogic in form, always a process of competition, negotiation, and argumentation, never simply a matter of repeating correctly’ (Thompson Drewal, 1988, p. 25). Thompson Drewal calls into question Turner’s claim that rituals both rely upon and create a stable social order (Turner, 1974; Thompson Drewal M. , 1988; 1991). Yoruba village elders contend that as society changes, rituals must also change in order to retain their relevance. Like explicit body performances, Yoruba rituals do not strive to duplicate rituals previously performed, but to re-present them in ways that allow for a critical distance. This critical distance is a revising rather than a repetition of what has been. It is a way of ‘altering the way the past is read, thereby redefining one's relation to it’ (Thompson Drewal M. , 1991, p. 43). The rituals of the Yoruba point to ways that approaches of explicit body performance may contribute to methods of applied theatre. While applied theatre looks to ritual as a lens through which to view performance, ritual structure can enforce, rather than critique traditional social scripts. Yoruba rituals, however, apply approaches akin to explicit body performance and employ ritual not to maintain, but to negotiate social norms. Instead of using ritual as a coercive attempt to align participants with existing social roles, in order to work towards transformation, ritual processes must invite individuals to reconsider and revise existing social scripts.
Posted by Aurora Murphy at 9:06 PM