When Performances of Pain Re-Traumatise

Performances that deal with traumatic issues may re-traumatise spectators. When these performances of pain are presented to those who have lived experiences that resonate with those on stage, these works may elicit and reinforce suffering, rather than suggest that any change is possible. Instead of assisting in the transformation of distressing circumstances, performing actual experiences of suffering may re-traumatise some spectators, reminding them of anguish. The simple act of remembering trauma can feel too dangerous, as a 72 year old survivor of the genocide in Rwanda said: 'Even when we think about those things that happened, those memories, I don't know why we don't die’.
Thetha Ngikhulume by the Victory Sonqoba Theatre Company
Applied theatre theorist Stephanie Marlin-Curiel (2002) discusses several pieces of testimonial theatre based on the Truth and Reconciliation Commission in South Africa, including Thetha Ngikhulume (Speak So That I May Speak) (1998) by the Victory Sonqoba Theatre Company, and directed by Bongani Linda. Performers were both victims and perpetrators of apartheid from the township of Alexandra, just outside Johannesburg.

Thetha Ngikhulume told testimonies of abuses from the lived experiences of local residents back to the community. Unlike many testimonial performances, this piece was not created by an organisation or formal group, but by a local theatre director in order to voice his concerns, and those of his community. Through Thetha Ngikhulume Linda, the director hoped to provide a vehicle for reconciliation between victims and perpetrators and promote healing in both performers and spectators.

Director, Bongani Linda
In performing their own pain, Victory Sonqoba Theatre Company anticipated that actors would develop strength and support. Psychiatrist Judith Herman, who writes in the field of trauma, argues that healing is a process that encompasses personal responses, and ideally, some form of public recognition. Herman claims that while personal therapy can be vital, political and legal acknowledgement of suffering can assist the process of healing. Yet in order to work towards healing, testimonial performances must transform shame into self-respect and humiliation into dignity.
Although Thetha Ngikhulume provides an acknowledgement of suffering, allowing those with experiences of trauma to share these events with those who had likewise felt similar suffering, the performance did not manage to foster a sense of strength. Narratives from the first act of the play tell of horror and violence, focusing on anger rather than reconciliation and burgeoning strength. Rather than a performance process that highlights hope and new possibilities, the show re-enacts painful true experiences. As stories gathered within the township are played back to the community this performance has the capacity to allow a communal space of loss and understanding, developing a shared vision of recovery. However, it also has the potential to arouse and agitate serious collective grief. Thetha Ngikhulume relives suffering with those already well-aware of its actuality. 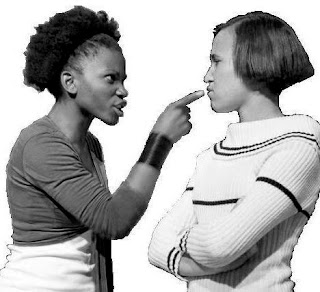 'Reconciliation' by the Victory Sonqoba Theatre Company
Perhaps more problematically however, Thetha Ngikhulume disturbs the boundary between representation and reality. Performance theorist Peggy Phelan insists that ‘show’ business is not ‘real’ business, and instead works within a fictitious framework to reveal fantasies of the ‘real’ world. Yet Thetha Ngikhulume ceased to be representation and instead stood in for the real as the performance revealed community secrets, telling stories some spectators would have heard for the first time. In this way Thetha Ngikhulume becomes a site for not only reflecting on past pain, but also disclosing fresh information. Rather than being what Richard Schechner calls ‘twice-behaved’ behaviours, these testimonies of pain became once-behaved, not representing, but rather becoming objects of pain themselves. Thetha Ngikhulume was intimate, so close to the events narrated on stage that it became a traumatic event in itself. In fact, part way through its tour of the township the performance had to abruptly end. The director, Linda tells: ‘It became real…. We couldn't differentiate between playing and reality’ (Marlin-Curiel, 2002, p. 276).
Posted by Aurora Murphy at 7:23 AM