As the federal election is announced, all the parties rush to get the unenrolled to vote. Including the Australian Sex Party. Here's their ad: 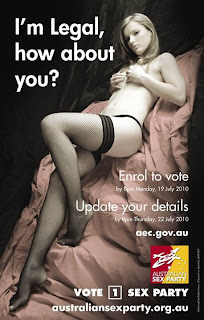 1. It's sexy
2. It's funny
3. It's provocative, over the top and in-yer-face
4. It will get noticed
5. The woman-subject of the image is speaking, rather than being spoken about

Here's some questions I have about it:
1. Does it reinforce the notion that it is sexier (cos it's dangerous) to be barely-legal? Ari Reid, the model, social worker, and South Australian who is running for the Australian Sex Party looks barely legal
2. Or is it provocative cos it questions societal fear about the sexualisation of young people and women, asserting them as able to sexualise themselves.
3. Is it wow-serism (like the sex party is against), or does it subvert by making obvious, wowserism?
4. Would this ad still work if Ari was: black (or non-white), fat, ugly, not-blonde?
5. Is it more subversive becasue Ari IS white, skinny, pretty and blonde?

Should we have a go at making our own?? Subvert the subversive message??
Posted by Aurora Murphy at 10:04 PM