Isn't it just better to focus on the good?

Moira Carmody looks to ways to 'challenge the normalisation of intimate personal violence' through her sexual ethics program for young people.

Rather than looking at what is dangerous and what is safe, Carmody helps young people focus on what makes them feel good in relationships. Rather than impose a morality that insists women guard their virginity, the sexual ethics program explores different values with young people, and looks at some implications of these. The sexual ethics program only explicitly looks at rape towards the end of the program, before that focusing on desire and ethics.

I'm also thinking about what Catherine Waldby says in her paper destruction. Waldby talks about performing fantasies that challenge the rape script. The rape script inscribes men's bodies as dangerous, and women as having a 'vulnerable inner space'. Man give and women receive. So fantasies that challenge this script could involve the phallic woman, or the receptive man. Waldby is speaking specifically of sexual fantasies. She believes that sexual fantasies can be a method of rape prevention. Pretty positive huh?

It's such a movement from the old, yet still very popular of 'no means no' kinda campaign. the type that scares women into staying in their houses cos noone ever gets raped there. And the kind that advocates a kind of 'protector' mentality in men: as if they cannot be attacked.

I'm interested in Waldby's idea of fantasy as a way to challenge reality and then create new ones. I feel like we have to think things, imagine them, even play them out before we can do them. 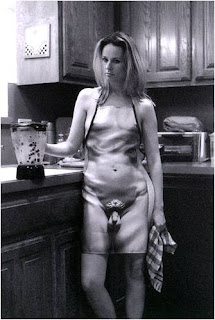 I think it does change us. It helps us see and feel safe in another way of being. It helps us to play and experiment, in safe ways, with other ways of doing things. It helps us to explore the other side without totally going there. I think it's really important.

Posted by Aurora Murphy at 8:08 AM