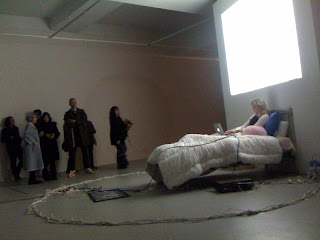 Today I went to the opening of Anastasia Klose’s i thought i was wrong but it turns out i was wrong at the Australian Experimental Art Foundation, Adelaide. This piece of performance art asks who is performing, and who is reflecting? It looks to the role of the artist in contemporary life, and the position of art in a hectic society. 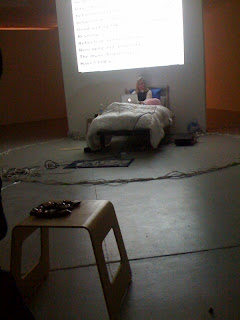 i thought sees Klose sits in her single bed, writing her autobiography on her laptop. The text she writes is projected onto the wall behind her. Klose writes that she likes a patrons’ shoes. She writes that she needs a drink, and the bathroom. She writes about the bright pink brothel near the Croydon train station, with the small sign out the front: ‘looking for work’. She writes to her Mother, apologising for not ‘going deep enough into the work’. She grapples with writing something interesting, something reflective, something worth coming out on a 7 degree July evening for. She struggles to entertain us, to remain interesting. We watch her not wanting to be watched. We watch her prefer to pretend she is not being watched so that she can be more authentically reflective. We watch as Klose reveals words that emanate from her silent body, and our quiet watching.
Throughout her artistic career, Klose has worked variously with video, performance, and instillation. In 2007 she was awarded the Prometheus Visual Arts Award for a video in which she walks around the streets of Melbourne wearing a white wedding dress and holding a sign which says ‘Nanna I am still alone!’. Yet perhaps more infamously and provocatively, Klose is known for her lo-fi film In the Toilets with Ben, in which she is having sex with Ben in the Victorian College of the Arts toilets. A second film then features Klose sitting on the couch with her mother and watching In the Toilets.
This most recent performance, i thought, which takes place on a bed, may also be seen as evoking the erotic and the confrontational. Within the tradition of ‘bed performances’ also sits John and Yoko’s days of bed-bound interviews, Tracey Emin’s messy bed art, and even the Freudian couch. Yet Klose’s bed is more comfy than erotic in i thought, and more reflective than revelatory.
In fact, i thought is more reminiscent of Marina Abramovic’s House with an Ocean View. In this ‘living instillation’, performed in 2002, Abramovic lived on stage at the Sean Kelly Gallery, inviting spectators to sit with her, and sleep in a ‘dream room’ next to her. Abramovic created House in response to the attacks of September 11th. She wanted to give citizens of New York a place to mourn, to be still. She wanted to give people time. 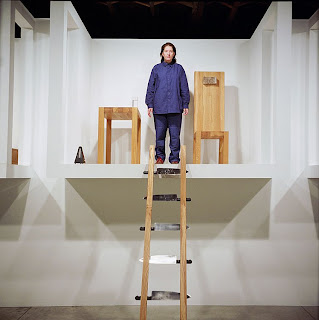 Like House, Klose’s i thought gives spectators time. Time to reflect, to stop for a moment and think. Yet unlike Abramovic’s House, Klose does not search for intimate connection with her audience, even writing that she cannot ‘look into anyone’s eyes’. Instead, Klose’s reflection is personal; we do not connect with her , but with our own act of reflection. As Klose reflects, we are invited to reflect with her. Klose reflects on the act of writing, of performance. This reflection is not pre-conceived, but immediate, and so we are invited into the act. Klose writes that she’s already used all her best material, and doesn’t feel prepared – hence we receive the un-premeditated and the un-rehearsed. We receive the art as soon as it is created.
Klose writes and writes for two hours (other than a break for speeches). Her focus invites spectators into her world. An inner world attempting to reflect on an outer world. i thought allows spectators time to think, an opportunity apart from the chaos to pause, and wonder.
Posted by Aurora Murphy at 11:27 PM