I attended a headphone/verbatim theatre workshop and presentation with Roslyn Oades on Friday. The workshop was presented by Vitalstatistix Theatre, and used work from Roslyn's show with Urban Theatre Projects, Stories of Love and Hate. 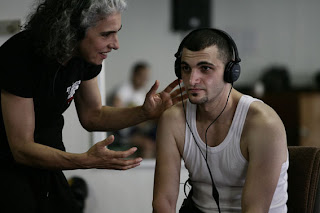 What is Headphone/Verbatim Theatre?
Headphone/verbatim theatre is a method of theatre-making which collects true stories of communities and individuals. These stories are recorded and edited, and played through headphones which actors wear on-stage.
The headphones serve as a visual sign that the words the actor speaks are not her own. Oades speaks of the actor as instead channeling the person who originally delivered the story. The actor reproduces the voice, breath, and vocal characteristics of the story, breathing their breath, feeling their words in their mouth.

This is similar to what Rebecca Schneider refers to as 'ghosting' in her book, The Explicit Body in Performance. Schneider's work is a key text in my research on rape prevention and uses feminist analysis to explore performances by Annie Sprinkle and Carolee Schneeman, among others. This 'ghosting' refers to the referencing of a precedent, as if to 'summon the ghosts'. It is not an attempt to find the pure, unadulterated story, but an awareness of the instability of representation. There is no attempt to recreate the real, but instead, to represent it. So in the piece, Stories of Love and Hate we do not hear the 'real' story of the Cronulla riots, but we listen to representations of representations of the riot. Moral judgement and any attempt to choose who is 'right' then receeds, as focus is intead drawn to multiple layers of representations.

Headphone/verbatim theatre draws attention to the absence of the original speaker, as layers and layers of representation layer and wrap around themselves. The headphones, and the attempt to precisely represent what is spoken and breathed through these headphones quote a precident. They make reference to the fact that there was an original, and this is not it. It is not an attempt to lull the audience into pretending that this actor really expereinced what they are saying. We are forced to see the gap. There is no real, but continually rebounding representations.


Headphone/Verbatim Theatre is Not 'Real'
This is not mimicry nor imitation. The actor does not 'become' the person whose story is being told. This is not realism, it is what Roslyn calls 'hyper-realism'. It draws attention to the real while not emulating it.
Headphone/verbatim theatre is an act of deep listening. It is like walking in another person's shoes. It is breathing their breath, feeling all the shapes of their words in your mouth. Perhaps this is an act of true empathy. Allowing the person's aural expression to fill the actor's body.

Does Headphone/Verbatim Theatre Attempt Transformation Through Performance?
As my research and practice is interested in transformation - using performance to explore transformation of the rape script - it is worth asking if this method of theatre-making can work towards this.
I suggest that headphone/verbatim theatre can transform stories in a similar way that playback theatre attempts. This is not a deliberate attempt to 'try something different', but a reflection upon what is. In this way then, it differs from drama therapy and Theatre of the Oppressed which uses performance to practice new ways of being in the world. In these styles, the stage is a mini-world, a safe and flexible world, which can be used as a platform to deliberately practice actions in the off-stage world.

Yet headphone/verbatim theatre (and playback) replays people's stories back to themselves as authentically as the actor is able, without mimicing, and without altering. New words are not put into people's mouths. People are not proscribed any course of action, nor asked to engage in looking at the issue in different ways. The 'right' way or a 'better' way is not sought.

The transformation that is enabled, therefore, does not occur on-stage, as it does in the forms of drama therapy and Theatre of the Oppressed. Transformation occurs in the mind of witnesses, after and during performances, off-stage rather than on-stage. Witnesses are presented with different and perhaps even conflicting stories. These stories are not presented as real, but as representations. So we are drawn to question them, to consider them. Unlike working with community performers themselves, I am not responsible for considering the on-stage words seriously - I am free to laugh, not care, to care too much. I am not responsible for the well-being of the on-stage performer, as the words they speak are simply repetitions of those uttered by someone else. Neither am I asked to consider the actor's cleverness, how astutely they can become another character.

Critical analysis is pointed to, yet not demanded. And this analysis can lead to a transformation of witnesses. Stories of Love and Hate has been performed to communities affected by the Cronulla riots. I suppose some people who were actively involved in the Cronulla riots attented the show. In this case, where witnesses may share opinions with those expressed on-stage, headphone/verbatim theatre encourages a reconsideration. It highlights an array of opinions, a range of views about difference, home, and family. It gently encourages witnesses to accept multiple voices, without settling on proscriptive advice.