Can stripping be a sacred act? 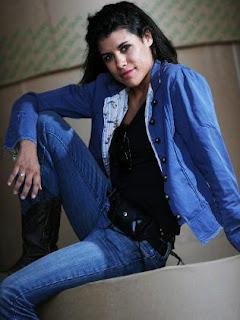 Feminist performance art controversy? As if!

Alizee Sery, a French tourist, has just been asked to leave Australia by Indigenous people in the Northern territory. As a tribute to Aboriginal people, and their history of living naked, Sery climbed the famous Uluru (Ayers Rock) and stripped down to a white bikini. A professional stripper, Sery tells that stripping is an act that embodies 'total harmony with the land and with myself'.

You can see her do it on this accompanying video .

Sery claims that after her climb up the rock, she wanted to 'sing, dance - and strip', such was her jubilation and sense of celebration and connection to the earth.

Although it cannot be ignored that even climbing Uluru is considered to be a deeply offensive and dangerous act by the Anungu, traditional owners of the land and the rock, I'm interested in Sery's claim that stripping is a tribute and celebration, rather than an act indulged in by big-breasted young women for the pleasure and financial reward from dirty old (or just dirty) men. Perhaps Sery's performance can be looked as contemporary feminist performance art?

Here is what I LOVE about Sery's performance:

1. She shows that women's bodies can be either Madonna or whore and not both
Have you read the bible? Mary, the virgin, never even had sex. But she still managed to birth a demi-god (good girl). Mary, the prostitute slut, knew she was shit so washed Jesus' feet with her hair (gross!).
The message is simple - a woman who gets naked for profit or pleasure can only be sexual or beg for forgiveness through (more) derogatory acts. The woman who has worth is a virginal mother who winds up in poverty and living with a donkey.
Sery cannot strip as a sacred act. Sacredness is a denial, not an embrace, of the flesh.

2. She thinks its fun and beautiful to strip
Sery relates her desire to strip as an act of jubilation. Like a three year old, taking your clothes off is a good way to cool down, and makes it way more fun to dance. Quite simply, she says that people used to live naked, and she wants to (un)dress like them to commemorate their lives.
When I was at school, we had to dress up in period costume to commemorate the first white Australians. We didn't get asked to dress like the early black Australians. Perhaps it's different in France?

3. She did what she wanted to
Sery said she's always wanted to climb the rock and then strip - two things that make her very happy. And she did it. what's the point in having a dream if you don't perform it? At least she did something interesting, gave her dreams a go.

Here is what I HATE about Sery's performance:

1. The white bikini
A white bikini is not naked. Why talk about 'getting close to the earth' with a couple of strings sticking between your butt crack? Go all the way Sery! If you wanna show that your strip is different to your work as an exotic nightclub dancer, then don't just whack on an Akubra.
Get it all off, let your pubes grow long, show us your tan lines and dirty feet.
A white bikini is tame, cutesy, and last season. This season is yellow.

2. That NT News love it
Have you read the NT news? Don't. Although a lot is politically interesting the Territory, the local newspaper prefers to keep its residents dumb so they won't see the disgusting levels of disadvantage faced by Aboriginal people in the bush.

3. That she climbed the rock
That's just rude. It's only ever tourists who do it, Aussies should know better. It's a sacred site dickhead. Get off!
Posted by Aurora Murphy at 9:36 PM